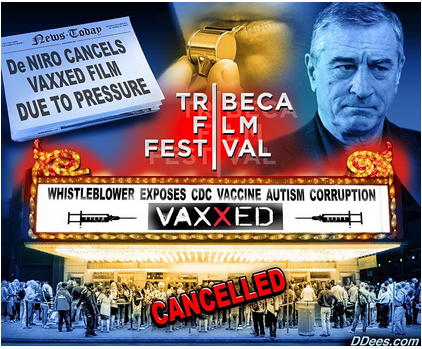 Who is Larry Cook? “Larry” worked as the Executive Director of the California Naturopathic Doctors Association for months before California voters established a precedent in being the first state to mandate vaccinations for school children, even those with parents who are philosophical objectors. In this position, “Larry” was compelled to work for his bosses and paymasters in the national organization. Larry lobbied in this day job for passage of SB 277, but at night, purportedly, he was an anti-vaxxer activist. During Larry’s “free time” Larry said he hosted stopmandatoryvaccines.com, dedicated to telling Internet traffic how terrible vaccines are–to a point.

Larry’s political position required him to promote SB 277, that set a national precedent for laws that would give naturopathic doctors (NDs) a piece of the “vaccine pie.” According to Larry’s agenda, NDs would vote in favor of SB-277 so long as they were authorized to get paid for services that included administering medical exemptions to vaccinations for needy patients. This story was largely covered in a related popular article.

Larry’s actions in his day job appear to conflict with his “night job.” Is this “hypocrisy”? “Selective reasoning”? “Psychoscotoma”?

Larry reflects the vast number of “anti-vaxxers” who neglect their hearts, souls, and core beliefs in favor of paymasters spreading a social disease aiding and abetting genocide–the mass killing, sickening and enslaving of humanity in favor of drug industry poisons.

But not according to Australian anti-vaccination Bev Pattenden, who we’ll refer to as Bev.

“As many of you know I have been fighting against vaccination for 19 years,” Bev wrote in a group email, “and I am aware of the great work of Leonard Horowitz.

“I am also a follower of Larry Cook on Facebook.

“For this [related article] to suggest that Larry Cook is a “double agent” appears to be just over the top. “In my opinion it was just a matter of a clash of personalities and egos on a cruise ship.

“Why on earth would Larry Cook pose as anti-vax campaigner [and sell out to lobby in support of SB277 favoring mandatory vaccinations], when every single post (including prayers) on his Facebook blog is critical of vaccination.

“He [Larry] says he has an injured son, caused by vaccines. Is this true?

“There is no back-up for this accusation against Larry Cook in the article and I am most disappointed that this clash of personalities may cause a rift in the anti-vaccine movement worldwide.

“Please keep these accusations against Larry Cook out of your reports, until you can show proof that they are true.

“In the meantime, let us hope that this evil vaccine beast is now brought to its knees, after 200 years of mayhem and lies.”

To explain Bev’s attitude and position on Larry Cook, I needed to coin a new word–“PSYCHOSCOTOMA.” Only with this new word can a reasonable person consider the facts and establish a diagnosis.

In medicine, a “scotoma” is a blind spot in vision. Accordingly, psychoscotoma is a blind spot in perception caused by media disinformation. This is different from “willful blindness.” This is a mental disorder responsible for much of the world’s needless suffering, and the stagnation of progress in every field of social activism and human rights.

A good example of widespread psychoscotoma exists with the film VAXXED, and the controlled media response to it. VAXXED presented a great opportunity to study this psycho-social illness affecting nearly everyone—people who believe vaccines are good, and the “anti-vaxxers” too who not true blue to their positions. That is, although they believe vaccines are risky, they are too afraid and programmed to dismiss the poisonous industry entirely.

I see both groups, pro-vaxxers and anti-vaxxers suffering from this same underlying psycho-social affliction. But people suffer in different ways and to different extents.

Let me detail psychoscotoma a bit more in both medical as well as lay terms.

A psychoscotoma is a “blind spot in normal perception caused mainly by media programming generating fear and psychological denial. This mental illness, or psychological “complex,” produces what is called a ‘belief-behavioral inconsistency’ within sufferers. The afflicted are not “stupid,” but generally called “dumb” by others who see the “big picture,” and can’t reconcile the harm done by the “dumb” “stupid” sufferers’ cognitive behavioral dissonance.

In other words, sufferers of psychoscotomas don’t say or do what they know in their hearts to be true. They are dishonest with themselves and become part of the deeper larger problem–the “herd mentality” disabling and damaging the “body politic.”

This widespread mental disorder, or ‘coping mechanism,’ is justifiably adjudged stupidity or ‘hypocrisy’ by people who are more aware, and honest with themselves. People who are not afflicted with psychoscotomas.

Bev, an anti-vaccination activist, clearly-and-convincingly demonstrated her psychoscotoma in at least three published statements: (1) “there is no back-up for this accusation against Larry Cook;” (2) “to suggest that Larry is a ‘double agent’ appears to be just over the top;” and (3) “it was just a matter of a clash of personalities and egos on the cruise ship.”

Investigative journalist Sherri Kane, this author’s partner, responded to Bev by simply asking if she had actually read the referenced article.

Kane and I wondered if Bev had actually read the article. She replied that she did. So we were dumbfound considering why Bev could not SEE what we published, that was right before her eyes, including the photographic evidence and video footage too, proving what we had written about Larry Cook’s “double agency” was true.

Had Bev’s psychoscotoma prevented her from considering irrefutable evidence of Cook having concealed his hypocrisy, to this extreme point of denial?

To clarify, under these conflicting conditions, Larry had acted as a naturopathic organization’s lobbyist and anti-vaccination informant, targeting and capturing the consumer “market” in California. By so doing, Cook had captured in his data base (and e-mail list) the identities and contact information for the State’s leading anti-vaccination activists.

As activists, or citizens being damaged, should we simply turn a blind eye to Cook’s double agency, and the friendships Larry Cook established with others who had infiltrated our conference in “bad faith,” including lead Big Pharma propagandist Colin McRoberts associated with intelligence agencies including the McChrystal Group?

Larry befriended McRoberts who was clearly and convincingly assigned to further disparage Dr. Wakefield’s reputation along with the film VAXXED.

Had Bev’s psychoscotoma exercised its blindness, denial, and aversion in favor of genocide?

Most anti-vaxxers admit that the drug cartel is sustained mainly by the PharmaMedia. What most anti-vaxxers don’t want to see, or admit, is that commissioned infiltrators we call PharmaWhores and PharmaTrolls have infiltrated their ranks, consistent with standard social engineering policies and practices. This reality exists beyond the mainstream media and social media infiltrations. What Bev did not wish to see was that agents had allied with one of her role models, albeit double agent Larry Cook, to disparage this author, Ms. Kane, Dr. Wakefield, and other high profile whistleblowers during the now infamous Conspira-Sea cruise wherein Dr. Wakefield first premiered VAXXED.

Here, in the photo above for example, you can see Larry Cook (center) is seen moments after assaulting and battering this author (left) to prevent me from merely delivering a set of papers to a paparazzi agent commissioned by Hearst Corp.’s Popular Mechanics magazine to libel Wakefield. The man in the orange shirt to the right onlooking is Big PharmaTroll Colin McRoberts.

Notice McRoberts similarly stands in his orange shirt behind Hearst-paparazzi Dina Litovsky. Here again McRoberts is eavesdropping–gathering intelligence–for his daily reports that he published on his blog “Violent Metaphors;” and later reported on in the popular pro-vaccine magazine Wired. McRoberts actually is a subordinate intelligence agent of Stan McChrystal, who directs the McChrystal Group, a quasi-military private company protecting Big Pharma’s racketeering enterprise.

This “matter of clash between two personalities” is not what Bev surmised. So the question is why? What would make a reasonable, intelligent, anti-vaccination activist neglect the obvious?

Bev’s psychoscotoma compelled her to manufacture a reason to justify her disappointment that not everyone in the anti-vaccination movement can be trusted, or work together. Such ignorance about how the real world “game” operates from the top down–from Pharma Moguls down to activists brains–and associated activist denial, causes as much harm to people as the vaccines are causing. Because by denying reality, and being opposed to see the truth for what it is, the status quo is left killing people.

Frankly, “a clash of personalities and egos” fails to explain the evidence, nor the manner in which Larry Cook physically assaulted me, and later extorted me in threatening correspondence. Then, with supporters like Bev, Larry continues to divert from his concealment of his “double agency” and complicity in generating a physical confrontation with this author before the camera-clicking paparazzi and Colin McRoberts.

“I won’t address the gist of your lame considerations,” I wrote Bev, outraged by her psychoscotoma. “Only reply to your concern that truth may cause a ‘rift’ between the anti-vaxxers.

That rift was there when Jacobson v. Massachusetts was decided. “The idiotic side of the rift believes ‘not all vaccines are bad.’

“Even Dr. Wakefield holds that position.”

Others, such as myself and Dr. Vera Scheibner call it what it is–genocide [administered by injection–‘Vaccinecide.’ Shall we say that the genocide damaging native Americans is more or less offensive than the Holocaust or Nigerian Civil War?

“Not one person,” I continued to write Bev, “can name one study that actually proved the safety of vaccines, even though there have been hundreds of studies that have contributed to the media’s foisted meme–virtual trance state–under which this lie is claimed to be true: “VACCINES ARE SAFE AND EFFECTIVE.”

The reason for this gross and outrageous lack of science and data analysis is, as you can read for example on the DTP vaccine package insert, that general physicians and the general public voluntarily report vaccine injuries. Thus, the data is restricted by special interests.  The injury data is significantly compromised, and therefore, so is the integrity of the statement “vaccines are safe and effective.”

This form of institutionalized scientific fraud and evidence concealment accommodates the vaccinecide we are witnessing with skyrocketing rates of autism. To maintain and conceal the genocide, counter-intelligence agents, including PharmaWhores and PharmaTrolls are required and hired to debate ad neuseum whether whistleblowers are frauds; while deniers, like Bev remain clueless, in their psychoscotomas.

“So long as there are hypocrites among us in the ‘anti-vaccination movement,” I wrote Bev, “–people who fear for their jobs, money, and social status quo–the ‘rift’ you project onto me and Cook will remain caused by people like you.”

The hypocrites, like Larry Cook, who know in their hearts ALL VACCINES ARE RISKY, and ALL VACCINES ARE NOT EFFECTIVE, but in their heads suffer from psychoscotoma and related denial, are as much a problem for the health of civilization as the Bill & Melinda Gates Foundation.

The author thanks veteran Australian anti-vaccination activist,  Bev Pattenden, for her correspondence that raised this issue of divisiveness and psychoscotoma. This matter must be part of the “dialogue” Robert De Niro sought to prompt by booking VAXXED at the Tribeca.