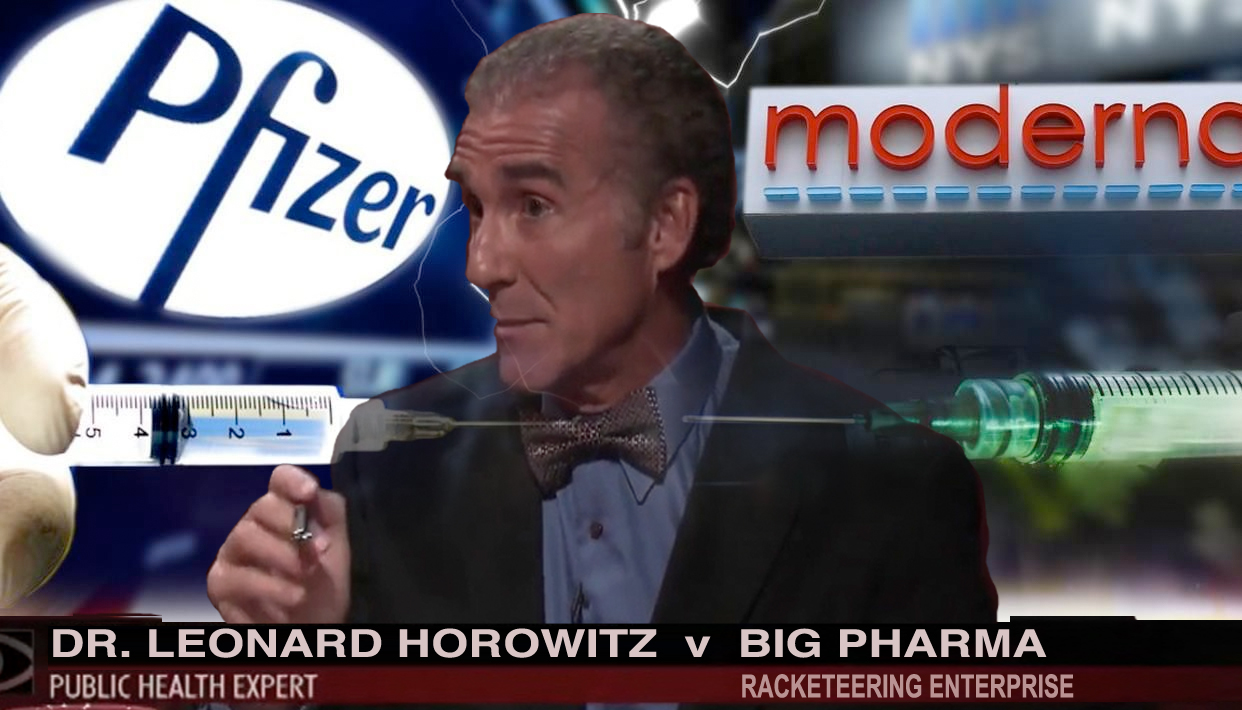 Las Vegas, NV (MedicalVeritas.org)—Pfizer and Moderna companies, along with vaccine distributor, Henry Schein, Inc., have filed to hide discovery of mRNA genetic safety risks in favor of billions made in governmental sales according to a federal lawsuit brought by whistleblower and former AIDS science Schein advisor, Dr. Leonard G. Horowitz.

Multiple mutants are now emerging globally as accurately predicted by the doctor in the wake of the defendants’ “novel” mRNA vaccines. The first mutants were reported less than two weeks after Pfizer’s mass vaccination campaign began in the UK.

These “genetic therapies” deliver their “payloads” by multiplying massive numbers of AIDS-science-discovered spike proteins, the doctor’s lawsuit explains. The manufactured “antigens” attach to human cells like keys unlocking the door to DNA function. The corrupted DNA then makes more of the same key entry-proteins.

These spike protein poisons, evidenced to deliver AIDS virus genes, are now spreading throughout populations to allegedly produce protective antibodies and ‘herd immunity.’ But at the same time the genetic-poisons’ shed from vaccinated people, merge with other transmissible viruses in them, and are expected to worsen risks of mutating and multiplying the pandemic through such actions.

On February 21, 2021, a new mutant reportedly emerged in Russia combining the coronavirus with the avian flu, H5N8.

“This indicates the risk to civilization is skyrocketing,” Horowitz said.  “As vaccinated people shed or spread the airborne viral antigens these genetic risks will merge with other viruses, such as herpes, H5N1, or even Ebola. That will ‘hyper-weaponize’ an increasing number of more deadly strains.”

The South African strain contains just such a spike protein. This mutation has been reported to be more deadly.

Meanwhile, the doctor alleges, the companies have not only “neglected crucial genetic safety studies and falsely advertised their vaccines as “safe,” but Pfizer and Moderna have filed in federal court to block such discovery altogether.

Aside from the genetic safety concerns raised by Horowitz, the efficacy of the Pfizer and Moderna’s mRNA products has been solidly debunked by the associate editor of the British Medical Journal, Peter Doshi, in two hotly-contested articles.

According to Amazon and Wikipedia, Horowitz is a Harvard-trained public health expert who authored the best-selling book in the field of AIDS and communicable diseases, Emerging Viruses: AIDS & Ebola—Nature, Accident or Intentional? He is also an award-winning filmmaker and pioneer of the competing anti-viral and vaccine alternative branded OxySilverTM—a NASA science advancement. He was subsequently smeared, censored, and deprived of his career in professional education and humanitarian medicine.

Viewed as a pharmaceutical industry competitor, Dr. Horowitz filed this lawsuit after discovering the defendants had planned to profit from the pandemic. They then co-advertised their vaccines as “safe” while neglecting and knowingly concealing genetic risks. Schein had similarly concealed AIDS science when Horowitz advised them. He objected to their officials’ alleged cover-up and was fired.

The questionable mRNA vaccines were approved by the FDA despite 23% of expert commissioners voting against cerification.

As a vaccine risk analyst and industry competitor, the doctor argues that the FDA violated its Emergency Use Authorization (“EUA”) requirements and the public’s trust.

“The ‘fast-tracked’ vaccines breached the EUA because alternatives, such as anti-oxidants, including OxySilverTM , were available but purposely dismissed. Much like hydroxychloroquine, OxySilverTM was neglected or unfairly rejected, and maliciously maligned,” the doctor explained.

“These are monopolistic practices,” Horowitz said. “They are illegal. ‘Regulatory capture’ by these drug companies best explains the FDA’s malfeasance.”

Defendants Pfizer, Moderna and Schein filed with federal case magistrate, Nicholas P. Mizell, that they intend to deliver motions to stay discovery of the genetic science requested by Horowitz, pending a motion to dismiss the case to conceal the evidence and their liability foreever.

If the enterprise’s motions are granted, the urgent information will remain hidden, and irreparable harm to society will compound according to Dr. Horowitz’s complaint.

The Possible Origins of 2019-nCOV Coronavirus (Confirmatory Science from China).