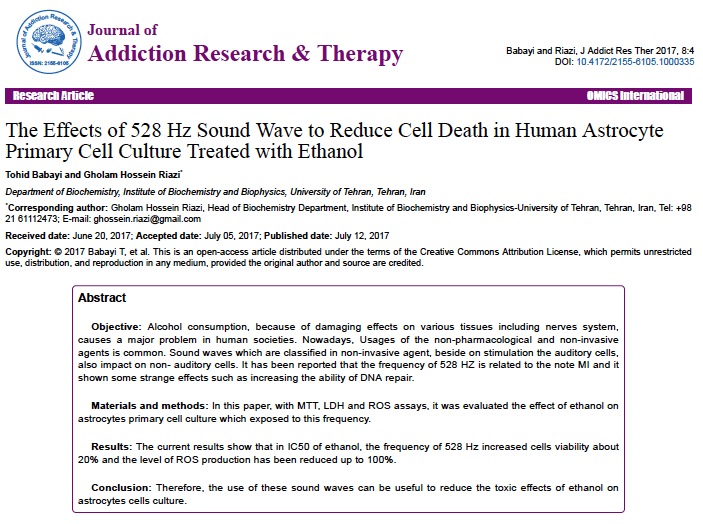 As the pioneer and primary proponent of A=444Hz/C=528Hz frequency ‘standard’ instrument tuning for optimizing health and safety, preventing damage from less harmonic or ‘dissonant’ vibrations, I thank authors Tohid Babayi and Gholam Hossein Riazi at the Department of Biochemistry, Institute of Biochemistry and Biophysics, University of Tehran, as well as the Research Council of University of Tehran for financing this important research.

When I was alerted to read this article, my efforts to download it from THIS LINK failed intermittently, causing me to republish the article here on Medical Veritas, respecting the original publication is open access.

However, as a medical journal editor, and as the person mostly responsible for the 528Hz frequency reputability, I took the liberty of making clerical corrections where I saw them. I found that the original article contained grammatical errors that deserved to be struck for quality and clarity. Consequently, the version of this article published below has been edited for clarity and quality, making sure to not make any substantive alterations.

Copyright: © 2017 Babayi T, et al. This is an open-access article distributed under the terms of the Creative Commons Attribution License, which permits unrestricted
use, distribution, and reproduction in any medium, provided the original author and source are credited.

Alcohol addiction is a chronic recurring disorder that it characterized by repetitive patterns of alcohol consumption leading to a loss of control due to alcohol intake. [1,2] Experimental studies have shown the structural and functional changes in neurons and astrocytes with chronic alcohol consumption. [3,4] Some changes, such as cognitive function and fine gross-motor performance are also observed in children by the fetal alcohol syndrome. [5] Ethanol alters the physical structure of the cell membrane and particularly effects on membranes with low cholesterol. On the other hand ethanol increases saturated fatty acids and cholesterol in membrane, which would reduce ethanol effect. [6] Alcohol abuse causes disorder in synaptic plasticity and neuronal function related to synaptic plasticity. [7] The neural changes induced by alcohol consumption may be related to the disorder of signaling pathways such as protein expression and gene
transcription at the cellular level. [8,9]

The central nervous system (CNS), consisting of neurons and glial cells, is the main targets of ethanol toxicity. Most glial cells are astrocytes which are tenfold more than the neuronal population in CNS. Astrocytes play an important role for normal growth and neural function. Glia cells contiguously cover the whole CNS, and exert many essential complex functions. [10]

Recent studies indicated that besides auditory cells, other cells respond to audible sound waves. For instance, the pressure feeling and vibration associated with sound waves can be felt in the chest and in throat cells. [14,15]

Sound waves can cause positive or negative changes in cell biology. One study of human gingival fibroblasts showed that the frequency of 261 Hz could alter cell growth and also observed that sound wave stimulation could cause dramatic changes in protein structure of tobacco cells, including increasing alpha-helix and decreasing β-turn. [16] Effects of Sound waves at 1 kHz and 100 dB for 1 h within a distance of 20 cm dramatically increased the cell wall fluidity, division of callus cells, and the power of endogenous hormones. The sound stress enhanced protective enzymes’ activity. [16] Sound waves were reported to likely stimulate ATPase activity in plant plasma membranes, the amount
of soluble proteins, sugars and the activity of amylase in the callus. [16] Sound
waves were thought to increase the amounts of RNA and transcription in
plant cells in which genes were induced by different types of sound stress to
produce more neurochemical response factors. [16].

528Hz, which known as the ‘MI” or ‘Miracle’ tone in the Solfeggio scale, is a sound wave that has been reported to cause significant and extraordinary changes in biological functions. [17] It has been reported that frequency 528Hz activates DNA repair by refreshing ‘structured water’ within the genome. Saykally et. al. such micro-clustered water restored DNA’s electroconductive capacity. [17] At 528Hz frequency, water molecules in DNA’s matrix cymatically-shapes six-sided hexagonal structures. [17]

Based on the aforementioned important effects of sound waves, and 528Hz frequency in particular, we investigated possible changes that might occur in nerve function within the CNS in response to this acoustic energy. In this research, the complex effects of two agents, ethanol along with 528Hz sound waves were studied on human astrocyte cell cultures.

Fetal human astrocytes were obtained from BONYAKHTEH Lab in Tehran. All cells were cultured in 160 mL sterile flasks with DMEM medium and 10% Fetal Bovine Serum (FBS). The medium was changed every two days and stayed in culture for 11 days to reach confocal shape. Then medium was removed and 1 ml trypsin-EDTA solution was added to each flask for 5 min at 37°C and 5% CO flow. Inactivating of trypsin was accomplished with the addition of 1 ml FBS/flask at 150nM. This was supplemented with penicillin/streptomycin. The cells were centrifuged at 300x g for 4 min. Then cells were then counted by using a hemocytometer.

Next, the cells were rinsed with sterile phosphate buffer to remove trypsin, and then treated with the experimental factors. Cell cultures were treated with ethanol and the 528Hz sound. Cell cultures received 25 mM, 50 mM, 85 mM, 110 mM, 150 mM, 250 mM and 500 mM of ethanol in 96-well plates. Also, the cells were exposed to the 528Hz sound wave produced by four stereo speakers. (Adam AX8) The speakers surrounding the cell cultures in same distance, which were suspended by a little platform and not in contact with floor so as to minimize potential piezoelectric confounding. As controls, the same cell cultures were exposed to silence (i.e., no speakers in the incubator); also one control was supplemented by the speakers being plugged into a computer without any sound production to observe a possible effect of the background noise or the magnetic field produced by the speakers. The sound wave frequency production system used Matlab software (to active the design composed of four speakers).

Metabolic activity of cells incubated in the presence of different concentrations of ethanol and sound wave were evaluated by MTT assay. For MTT stock preparation, 5 mg of this compound was dissolved in 1 mL of phosphate buffered saline. After incubation, 50 ml of the supernatant medium was removed to measure lactate dehydrogenase activity; and then 5 mL of stock MTT was added to each well. After four hours storage at 37°C, the reaction was stopped by adding 100 mL DMSO or 0.04 normal HCl in isopropanol solution. This solution made the dissolved purple precipitate formazan chromophore appear in cells subsequently measured by ELISA plate reader at a wavelength of 570nm. The results were observed and expressed as a percentage of the control viability.

Reactive Oxygen Species (“ROS”) production in cell culture was detected using a dichlorodihydrofluorescein diacetate (DCDHF) fluorescent probe obtained from Sigma Aldrich. This compound is an uncharged cell permeable molecule. In cells’ cytoplasm, this probe is cleaved by nonspecific esterase and converted to form carboxydichlorofluoroscein, which is oxidized in the presence of ROS. Cells cultures were loaded with 10 M in DCDHF serum free medium for 30 min at 37°C. Next, cells were washed and incubated in medium and were treated as indicated in the figure legends. Fluorescence spectroscopy was monitored by microplate fluorimeter, using wavelengths of 485nm to excitation and 538nm for emission.

This assay was conducted by the measurement of the cytoplasmic lactate dehydrogenase enzyme (LDH), which is present in all cell cultures, and when plasma membranes are damaged by apoptosis. The enzyme is then released into the cell culture mediums. By using LDH enzyme activity, cell death is determined. Increasing the amount of LDH activity in the supernatant of cell culture medium, correlates directly with the amount of formazan formed in limited time period.

Evaluation of cell morphology was done by phase contrast microscopy. The appearance of control cells and under the influence of sound waves and various concentration of ethanol were studied this way. 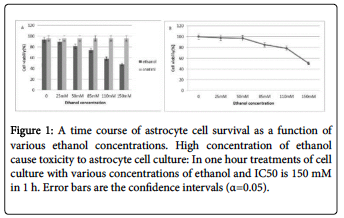 The results of LDH assay indicated that this sound wave (528Hz with 80db intensity) reduced lactate dehydrogenase activity in the astrocyte cell cultures. Cytoplasmic lactate dehydrogenase enzyme releases into the culture medium as a marker for diagnosing the integrity of cell membranes, and thus detecting this enzyme in culture medium, is believed to result from cell apoptosis. In astrocyte cell cultures treated with varying concentrations of ethanol and then treated with 528 Hz sound wave, the release of LDH was reduced about 20% in the 80 dB sound wave, and marginally reduced in the 100dB, experiments. 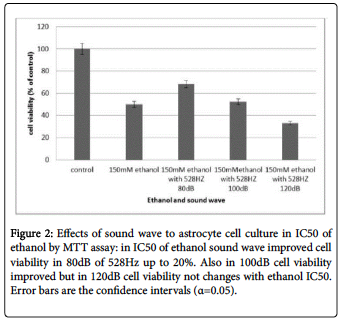 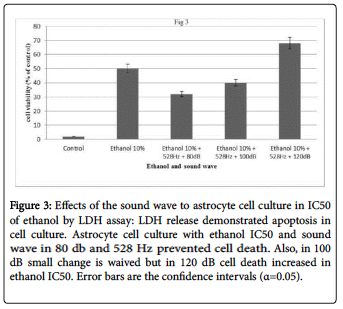 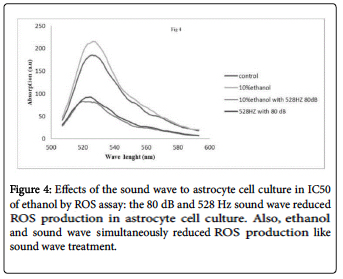 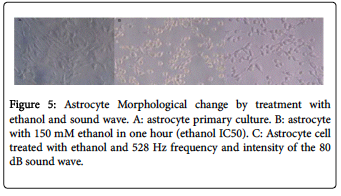 Chronic alcohol consumption is a key factor in the destruction of brain tissue. [18, 19] The main effect of alcohol in brain cells is the production of ROS in astrocyte populations. [18] ROS is a measure of ‘oxidative stress.’ In astrocyte cells, ROS generally provides a protective effect. In the present study, we investigated the early effects of acute ethanol in human hippocampal astrocytes primary cell cultures exposed to ethanol and the 528Hz frequency sound wave, on ROS and astrocyte viability.

Results showed that ethanol produces ROS in cells, and that this ROS in physiological concentrations can sometimes trigger changes in signaling pathways. There is general agreement that excessive concentrations of ROS can be potentially toxic, but normal levels act protectively. [19]

Astrocyte cells are the first barrier against ethanol-induced oxidative stress and with metabolism of ethanol having a protective role for neurons. [20] Ethanol catabolism is induced by catalase, cytochrome P450 and alcohol dehydrogenase. [21]

The purpose of this study was to determine whether a precise frequency could have beneficial properties, such as improved nerve cell viability or reduction in production of ROS at the cellular level. 528Hz was chosen as a test wave because it is referred to as a “Miracle tone.” It was reasoned that this frequency might, therefore, provide tranquility or relieve stress. Lorenzen, Emoto and Horowitz [17] reported this frequency showed the capacity to ‘cluster’ (structure) water molecules enhancing DNA function, normalization, or ‘repair.’ The frequency of 528Hz is known as a generally harmonic, non-invasive, agent. [17]

Here the results evidence that incubation of astrocyte primary cells with ethanol produces ROS leading to oxidative stress and cell death. This was confirmed by MTT and trypan blue assays. IC50 for ethanol is 15 mM ethanol in one hour. Released LDH in cell culture mediums in 150mM ethanol showed that in this concentration only 50% of the cells remain viable.

It is generally agreed in the public health community that sound exposures louder than 90dB is damaging and distressing. Accordingly, the results observed here appear to corroborate this consensus. The higher intensity sound waves beyond 90db neutralized the protective benefit of 528Hz, as seen especially in the 120dB cultures. The morphological picture proved cell death in astrocyte primary cell culture treated with ethanol and 528Hz sound wave at 120dB.

These results suggest that using 528Hz sound waves at 80dB intensity reduces the damaging side effects of ethanol consumption by approximately 20%. This may be beneficial to alcohol consumers and alcoholics.  Future studies in the use of specific frequencies for health, stress reduction, and disease prevention may provide benefits, beyond those shown here regarding alcohol, such as in substance abuse and addiction treatment programs.

The common wavelengths of sound existing in the human environment, aside from creating psychological impacts, appear to alter intracellular reactions.  This study proves that some of the negative effects of alcohol on the CNS may be attenuated by certain sound waves and their impact on astrocytes. The protective impact of 528Hz at 80dB served to reduce cell death by approximately 20%, and ROS by 100%.

The authors appreciate the financial support of this investigation by the Research Council of University of Tehran. Also, both authors declare that they have no conflict of interest in this report.